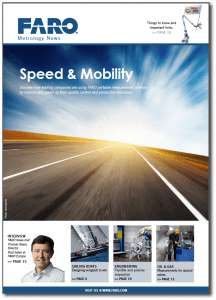 The Argentinian-born designer Horacio Pagani has risen to the top of super car industry, making a name for himself through his application of advanced composite materials. At Lamborghini, he worked on the designs of various famous models before founding Modena Design and starting work on his lifelong dream – the Pagani Zonda. 206 variations of the Zonda were created and built between 1999 and 2011. Then in 2011, Pagani revealed his new Huayra. It is a stunning curvaceous creation that is to many eyes, the fulfilment of Pagani’s dream to create the most beautiful car in the world.

While championing a commitment to renaissance artists and hand craftsmanship, Pagani is firmly settled in the 21st century when it comes to metrology: the company owns two FaroArm Fusion systems. It also has one FARO Laser Line Probe that can be attached to either measuring arm to provide seamless Laser ScanArm functionality. With these systems, Pagani is perfectly equipped for free form surface measurement, part inspection, part-to-CAD comparison, rapid prototyping and reverse engineering.